The Aikido Chuseikan Dojo of Tampa Bay is proud to host a benefit seminar for Todd Jones Sensei (5th Dan).

Please join us for an exciting day of training and a great opportunity to support Todd Jones Sensei in his campaign.  After training there will be a BBQ and plenty of social time to meet with Jones Sensei and learn more about how he is an asset to the community and his thirty year history of protecting taxpayers from inaccurate assessments.

Check out this great article by Jones Sensei from Aikido Journal:
http://blog.aikidojournal.com/2014/02/26/popular-angular-attack-theory-an-aikido-perspective-by-todd-jones-2/

Todd D. Jones first began studying martial arts in 1971 at the age of thirteen. He studied Moo Duk Kwan Tae Kwon Do under James Diaz while living in Miami Beach. In 1974 he began studying iaido, kendo, and aikido as well. On March 16th, 1975, Mr. Jones became James Diaz’s third student to attain the rank of black belt. He subsequently attained black belts in kendo and iaido in 1977, and in aikido in 1980.In the fall of 1975, Mr. Jones founded the Florida MooDukKwan Club at the University of Florida. From 1979 to 1984, Mr. Jones was a nationally ranked competitor in both kata and kumite, while Florida MooDukKwan grew to be one of the University of Florida’s largest intramural organizations. In November of 1986, Mr. Jones and his senior black belts formed the American MooDukKwan Society, now called American Butokukan, of which he currently serves as style head. By 1987, Mr. Jones had promoted over thirty black belts, and to date has promoted over 100. He currently holds the ranks of 7th dan in karate, 5th dan in aikido, and 3rd dan in both iaido and kendo. 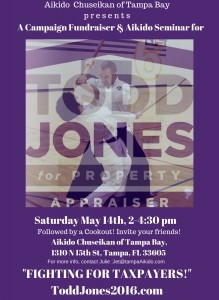