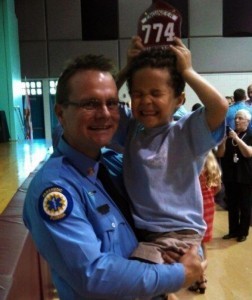 AC: Please tell us about your background and how you got into the martial arts.

DB: I had worked for years as a carpenter, sculptor, and welder – all of which I enjoyed – but I hoped to find an occupation that encouraged me to be more physically fit, as well as being able to contribute to my community. In this sense, firefighting was a perfect fit for me. I went back to school and started an exercise regimen. Training for the fire academy got me more interested in running which I pursued on and off, eventually running a few (very slow) marathons. I celebrated my graduation from Paramedic school in 2003 by hiking nearly 100 miles in eleven days around the base of 14,411 ft Mt. Rainier in Washington State with my wife. In 2010, after several previous climbs of easier peaks, I was able to summit Mt. Rainier as part of a two-man unguided team with one of my fellow firefighters.

In 2013, my then four-year-old son began studying Tae Kwon Do. I began to think that the time I spent watching could be better spent if I could get on the mat with him, however Tae Kwon Do didn’t really appeal to me. I was drawn to the philosophical stance of Aikido in contrast to many other martial arts, so in early 2014, my son and I began training together at Aikido Chuseikan.

What part of aikido practice is interesting to you right now and why? (A particular technique, philosophical idea, ukemi work, the community, etc.)

The conflict resolution side of Aikido, which teaches pacifism without passivity, is something that could benefit many people. What I like to call “muscular pacifism” is not often practiced in our society, but it is something that has always interested me. These are also the same characteristics that make a great firefighter: strength, bravery, compassion, and a concern for others.

What’s one of the most challenging parts of the practice for you?

Every day brings a new challenge, but I would say that the most difficult part is simply having to struggle with something in the presence of others who are often much more skilled. Aikido only really exists in the presence of a partner, so my tendency to hide out on the fringes until I feel confident is not really possible. Virtually everyone I’ve met there has been extremely welcoming and eager to help out the newcomers.

What’s your advice for beginners on the mat?

Relax and have fun. Being able to laugh at yourself helps a lot. Also, start making a list of the fundamental movements and their Japanese names. You should eventually be able to watch a technique being demonstrated and know roughly what it is called without being told. Conversely, when someone calls out a technique, you should be able to piece the words together to form a mental picture of the technique in question.

Your son is also involved in training. What do you think are some of the benefits he has taken from participating in the Youth Program?

I knew that the Youth Program was having an effect on him after just the first few weeks. A couple of weeks into his training he had a dentist’s appointment that he was very nervous about. In the car on the way there he informed his mother that he was going to practice his “Ninja breathing” technique [from class]. He shut his eyes and focused on his breathing until he was able to collect his thoughts. My schedule is pretty hectic and we don’t always get the amount of father-son interaction that we’d like, but being able to train together gives us a few hours a week that we can count on, and it allows him to see the importance of challenging yourself and learning new skills even as an adult.

I would just like to say how pleased I am to have found the Chuseikan community. To progress, you have to make training a part of your daily routine, and if you don’t enjoy what you are doing and the people that you are doing it with, then you will never stick with it long enough (and consistently enough) to see the real long-term benefits. I now spend a good deal of time at the dojo and I thoroughly enjoy the support and interaction that I have with the other members and the instructors. I attend Strength & Conditioning classes, the youth and adult classes each a couple of times a week. It helps that my son can hang around and play, read, or do his homework while I attend an adult class or a Strength & Conditioning workout.   The dojo atmosphere feels more like an extension of my home life than something that takes me away from my family.[/vc_column_text][/vc_column][/vc_row]