There are a lot of aspects to Aikido that make it distinct from all other martial arts; its moral foundation and objectives, its prioritization of spiritual discipline, its emphasis on takemusu (infinite expression) and principle over technique, and of course its unique perspective of indirect solutions to aggression.  Many might also argue that its study of ma-ai, de-ai, and concepts of connection and kuzushi are integrated in a subtle and special way.

All of these features quickly spring to mind when explaining what makes Aikido different, but in my experience, there is one aspect which in many ways is more important and profound than these other (critical) characteristics.  That critical aspect is very simply the art of collaboration in keiko (training).

I Must Be Better Than You

In my life I’ve been a dues-paying, regular member in nearly a dozen dojos of different martial styles – Japanese, Okinawan, Korean Karate; Judo; Kendo; Tai Chi Chuan; Ninjutsu; Tae Kwon Do.  I’ve taken more than 26 kyu tests in my life!  Some of these were good schools with great teachers and students, with nurturing relationships, strong foundations, and highly positive aspects.  But no matter how helpful the sempai-kohai (senior-junior) practice moment was intended to be, in each and every one of these arts the one-on-one training aspect was defined by a certain reservation that changed the very nature of the martial growth experience compared to most Aikido dojos I’ve experienced.  At some level, my teacher, senior, or training partner that was helping me learn was holding something back in order to be able to defeat me, to be able to show me up when necessary; the implicit goal was always, always to be better than the other students in the end.  Today you train together, tomorrow you will compete against.  Usually, the significance of that “I am here to help you as long as you don’t get too close to matching me” attitude was hidden unless the junior / partner accidentally threatened their training partner on some level, in which case often “put them in their place” demonstrations would burst out and confuse, hurt, frustrate, or incense the junior student who was just doing their best.  It is a cultivated atmosphere of competition (which in and of itself is not bad and indeed can be highly valuable) but more importantly, it is a cultivated atmosphere of learning at the expense of others.  I believe that it fosters a subtle insecurity that pervades not only the dojo, but the mindsets of everyone who trains in the dojo.

I will give an extreme example.  My first Shotokan Karate teacher had been training us to work a bunkai (freestyle application) block and counter technique for a couple of weeks.  I was a teen, a mere 3rd kyu or so, and not nearly as big of frame as I am today.  In a little 1:1 touch freestyle practice with my Sensei, I managed to execute the technique and get past his defense to lightly tag him, much to our mutual surprise.  However, instead of using it as a training moment, he responded emotionally and stepped in with a leg hook and slammed my head against the floor, briefly stunning me unconscious.  When I regained my senses, he was still yelling at me and berating me for my audacity.  I was confused, injured, and as of that instant, never his student again.  This story is fortunately a rare example of a dangerously bad teacher, but it does illustrate an insidious and all-too-common attitude that “others are allowed to shine only to the point that they cast a shadow on me, and then I am threatened and must demonstrate my superiority”.

It is a subtle, harmful variation of the principles of self-mastery and self-growth that underlies many training environments, and it is either benignly ignored, mildly pervasive, or even subtly encouraged in many environments I have experienced.  At best, it manifests as “stopper” dojos, where most students come to believe that skill is demonstrated by countering all efforts of training partners. In these environments, mistakes and experimentation are to a greater or lesser extent punished, defensive (“you can’t score on me”) attitudes are encouraged, and physically strong students are cultivated.

Defensive, ego-first attitudes are of limited value across real life applications.  I’m not talking about “when you are attacked by another trained martial artist on the street”, I’m talking about when your boss gets angry at you, when you are challenged by a coworker, when you have a fight with your loved one, when you are socially embarrassed, when you have to deal with aggression and stress in a real-world environment in which there are social, professional, and relational repercussions for your behavior and attitudes.

We Must Become Better Together

The defining characteristic of any “lifer” martial artist is stubbornness (well, you can be more charitable and call it “stick-to-itiveness” or “determination”).  We spend a lot of time running into walls.  Running into walls doesn’t feel particularly good, and very quickly most “normal” people fall away, leaving behind only the rare few who are convinced that some day that wall will lose.  On one level, “running into walls” is a metaphor for shugyo, purification, chipping away at self-perfection against the certain knowledge that it can never be reached; our partners provide the wall and the challenges for us to overcome.  On another level, “running into walls” is the insanity of Don Quixote of La Mancha who charged at windmills thinking that his quest was to defeat dragons; thinking that the best road to perfection is through a group of people who strive to defeat your every effort is no different than running at walls.  The end of a long training session with a struggling, fight-and-resist, “prevent the thing I know you are trying to do”, competition mentality is exhausting and brutal, and it leaves you feeling frustrated and beaten down more often than not.  It is a test of will and discipline to step back into that environment, and gains come slowly and incrementally because it is work.

But here is where I feel most Aikido environments are different – the foundational moment of partner-on-partner training is defined by cooperation and honest attacks.  “Honest” meaning with sincere energy, no deception or intent to trick your partner, clarity of intent to complete the strike or attack with force and enough energy to threaten nage (the defender) and at a level not beyond their ability to resolve on their own. It is a nurturing, learning environment, not a competition environment.  At its best, it is Serious Play (a concept from military training) – a fun environment that stimulates creativity and problem solving and personal expression.  At its best, it is a redefinition of success requirements, where students feel good not because they have overcome another student, but because an unexpected and amazing moment was created mutually.  Goals can still be set for martial seriousness, stress inoculation, perfection of technique, and improvement of demonstrated performance.  However, when a long and intense training session is over in this environment, everybody is smiling, energized, enthused, and unwilling to stop; the next morning, the body feels stronger and ready to return.  Injuries are fewer because the training does not require overcoming of resistance, but rather improvising solutions around it.  Aikido dojos are the only environment where I regularly witness students both celebrating and laughing at a particularly successful execution, and both immediately dissecting what happened in order to better understand it and recreate it together and apart.  “That was awesome, let’s do that again!”

In this environment, the objective shifts from “I must learn to be better than you” to “I must help you become as good as you can, so collectively the entire dojo becomes better – and as a result, the entire dojo is better able to help me reach my highest potential”.  It subtly encourages taking a bit of responsibility for the growth and learning of all other students toward mutual success. 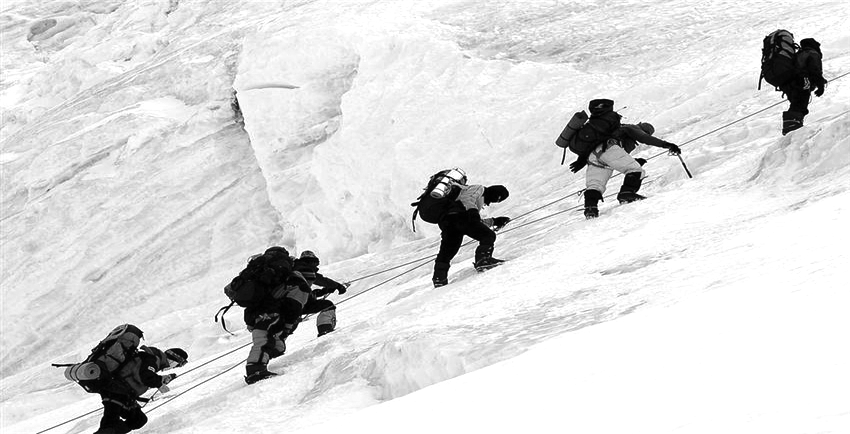 It takes a committed team to climb the highest mountains.  The peaks cannot be reached alone.  Of course, a sherpa or two never hurts!

Of course, I am speaking in broad generalities; there are exceptions, and nobody should feel I’m pointing fingers at their dojo or art. I value my past experiences with many arts and the broad perspective they have provided me.  I appreciate the sense of assuredness and confidence that my competition (shiai) experiences in Karate, Judo, and Kendo have instilled in me; being tested mano-a-mano is no joke.  I can name some amazing Karate, Judo, Systema and other dojos where the environments are immensely positive.  Competition and traditional mindset dojos and arts do produce some amazingly talented people. On the flip side, I have experienced a number Aikido dojos where ukemi is derided as “training for failure”, and a pursuit of the myth of “street lethality” is cultivated over community and pursuit of O Sensei’s vision of harmony and world peace, or where the purpose of the training was really to feed the teacher’s ego.  The art is no guarantee of quality or attitude in and of itself.  Even in great Aikido dojos, there are of course individuals who take a long time “to get the message”, and even the most enthusiastic of us have egos and particular insecurities that need to get explored and trained on the mat (another metaphor for shugyo, purification).

Let’s not pat ourselves on the back for the amazing thing we have.  Let’s recognize how rare and special it is, celebrate it when it manifests, and cultivate it so it grows and we all benefit.  Let’s recognize when we are inappropriately making “it” about ourselves.  It’s not about making ourselves better, it is about making our community better so we all benefit.  Let’s see if we can find our Founder’s meaning in the very way we train.