This article was written with Bookman Sensei, and based upon an interview with him during his visit to Tampa in February 2016.

Every martial art I have trained in besides Aikido has some common mindsets.  In particular, there is the assumption that we can always control our partner and the situation, and if we don’t succeed, it’s just because we haven’t become good enough at “controlling”.  Our objective is always to control the situation to defeat the other for our advantage and their disadvantage.

However, to truly train in Aikido, you have to give that up.  There is no control, you cannot control uke or the situation.  You can train and train for a particular scenario – to get good, for example, at dealing with knife thrusts because you train with increasingly skilled attackers and within certain scenarios.  But no matter how many scenarios you have prepared for, there are “infinity” more scenarios you have not prepared for which are just as likely or realistic.  You cannot control what an attacker is going to do, what type of attacker you will get, how many attackers there will be, or where you will be when a situation happens.  True “aiki” only arises when you have philosophically given up on trying to control the interaction.

More importantly, Aikido is based on a different objective – instead of trying to defeat another, you are trying to find an outcome that is positive for everybody.  You are striving for a maximally positive outcome, even for the attacker.  The concept of taking responsibility for attacker, and trying to help him achieve a positive outcome is not part of any martial sport or other art than Aikido. We do this despite the intentions of our attackers, and because we believe there are repercussions from violence that cannot be solved with greater violence.

Because of this, ours is the most difficult is the most difficult path.  You can’t brute force your way through Aikido.  You have to eventually become mature enough to accept that you cannot force the outcome, or overcome your opponent through manipulation.  There is no path to a lasting, mutually beneficial outcome through forcing your opponent to submit to your ideas.

Unfortunately, when you close your hand into a fist, something changes in your mind and it becomes difficult to maintain a complete aiki perspective. So in our training, as we strive to keep our keiko realistic and keep it from being ritual, it becomes difficult to not slip out of our aiki mindset. Instead of being an aiki practitioner doing a strike, it is easy to lapse into becoming a striker attempting to practice an aiki technique.  The difference may be subtle, but it’s important.

The path to maintaining both effective martial and aiki perspectives is to start slowly. First with physical technique, you should start slow.  When you feel calm and confident and comfortable while successfully executing the physical technique, you can start working with a faster and faster attack. It is the same with mental composure. Again start with a slow attack, and if you find you can maintain your internal calm and composure, you can try working with a harder and faster attack. If you can hang onto your calmness, you can move onto harder attackers, but if not it is always OK to move back to a slower attack. The secret to learning how to perform fast and effective technique is to study it slow.  Although this is more difficult than just learning how to gain points or to defeat an opponent, it is a very valuable way to practice. As long as you consistently work at the edge of your comfort zone, can be assured you are cultivating useful technique, an aiki mindset, and will continue to grow. 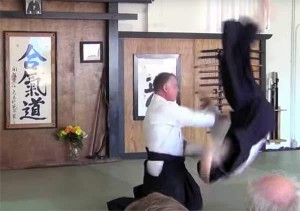 As you grow, it’s also important to keep in focus one’s practice goals. After learning the basics – whether that’s at 3rd kyu or yudansha levels – every practitioner has to adjust their training to set and achieve personal goals. Some look to Aikido for self defense, for example. That takes a partnership between instructor and student to make sure that the gap between classical technique and street application gets addressed realistically. Some practitioners live in a fantasy world, believing that studying Aikido in the traditional way will prepare them for mixed martial arts.   That is an unrealistic expectation not only for Aikido but also for the striking arts and sport jiujitsu (which most who do BJJ are practicing).   For mixed martial arts, one must train daily against skillful grapplers and strikers. One needs time “in the cage” taking risks that most people, including myself at age 58, are unwilling to take.

Aikido is a beautiful art that focuses mostly on personal growth and development. This includes inner reflection (meditation), balance to one’s interactions and self-defense. It can be a life-long path that leads to fulfillment as a person and as a martial artist. It is up to each Aikido student and instructor to make their training meaningful, and setting clear goals can help keep their Aikido both realistic and valuable.

Sensei Bookman holds the Aikido World Headquarters rank of 6th dan, and is the Founder and Chief Instructor of the Tenzan Aikido organization based in Seattle, Washington. He has been practicing Aikido since 1970, and his extensive experience with Brazilian Jiujitsu, boxing, Tae Kwon Do, Judo, Yoga and classical Japanese swordmanship bring a uniquely dynamic and broad perspective to his instruction.