Among O Sensei’s uchi deshi, Mitsugi Saotome Shihan has a reputation for his amazing and martial randori (multiple attacker) demonstrations. As you may have read from Sensei’s biography, he has consulted and demonstrated for the Pentagon and the US Army Special Forces about multiple attacker and “gauntlet” scenarios. Randori is a special interest of mine, and I’ve had a number of conversations with Saotome Sensei on the topic of randori tactics and mindset.  Over time, I was fortunate to capture some notes and his personal sketches about his mindset and tactics against multiple attackers.  The following images are sketches that Sensei made (on some coasters) to illustrate his explanations; he used similar illustrations with me on more than one occasion, so I have shared the originals to preserve authenticity.  As he kept adding to the illustrations as his explanations progressed; the other illustrations in this article are my best attempt to recreate the different aspects of his sketches and words to me. 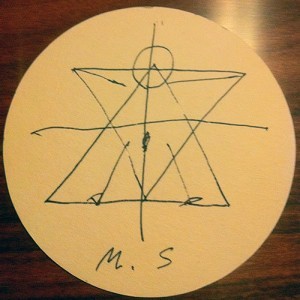 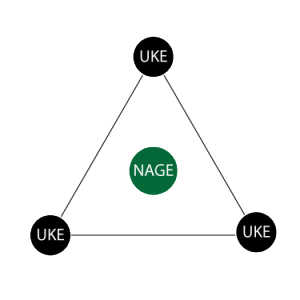 The essence of this is first to avoid a trap; secondly, to use it to your advantage.  The way the triangle is structured, it always appears that safest directions “split the distance” between attackers.  Unfortunately, this is the trap; trying to escape through the most open gap in the triangle instead allows two attackers to strike nage simultaneously from opposite sides, while requiring them each to travel only a minimal distance.  Escaping through the middle only sets up a “pinch” scenario where two attackers only have to travel 1/2 the length of the triangle’s edge, where nage must defend herself from two sides – ukes can close that gap very quickly, more quickly than nage can usually perceive. 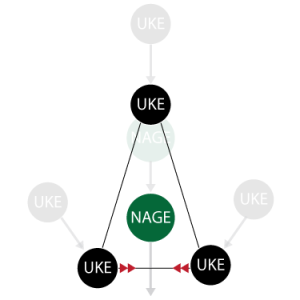 There is no escape.  There is only irimi.

Saotome Sensei explains that the safest route is always a close irimi through one point of the triangle.  In his original sketch (below), three different vectors / directions are shown.  The second illustration shows that a close irimi (entering) on a single attacker causes the remaining two attackers to travel the maximum possible distance (the full length of the triangle’s edge).  More importantly, an irimi movement that “hooks” around and behind the targeted uke then places that uke between the two remaining attackers – creating a human shield, and allowing nage to completely escape being surrounded in the triangle. 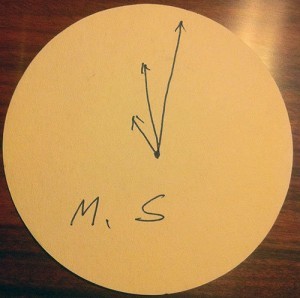 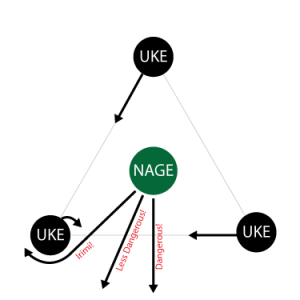 Once nage is outside the triangle, Saotome Sensei says the next trap is allow the three attackers to continue acting and moving independently.  He says that trying to be aware of three independent attackers indefinitely will always fail; there are too many things for one mind to keep track of.  By taking control of one uke, nage only has to keep track of two attackers; however, by using the principle of convergence, nage can create situations where she can treat all attackers as one single (large) uke for an instant.

In the following illustration, Sensei shows a nage who is already outside of the triangle.  Nage moves directly away from the attackers in a straight line, and each uke tracks where nage is going, attempting to catch up.  As nage continues, the attackers are forced to draw closer together.  If nage can draw her attackers a sufficient distance, the ukes will not only be almost on top of each other, but will all be traveling at more or less the same speed and direction; this gives nage a brief opportunity to pass or deal with them all at once, as if they were a single large body.

Sensei cautioned that this tactic works differently on a curve (where attackers can try to “cut nage off”), or if nage stays too close to the “bunched up attackers” for too long, allowing two or more ukes to strike at nage at the same time. 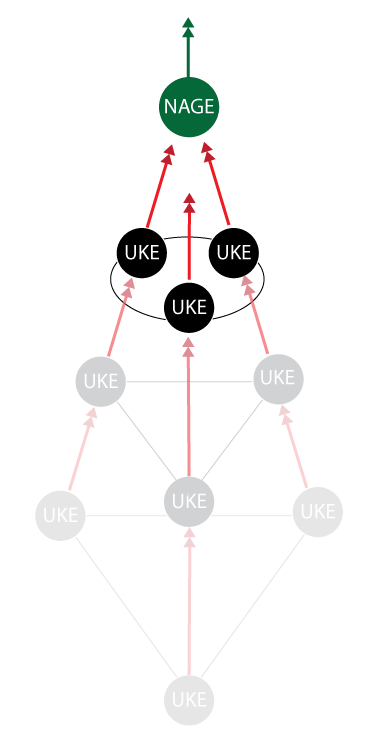 The final trap is “locking in” mentally on one or two attackers.  Sensei says that when we feel threatened, our instincts narrow down our vision to the most immediate threat.  However, that makes us vulnerable to the threats we cannot see, and strips us of the ability to fully use all of our senses; while our vision only shows us what is in front and to the sides of us, our other senses can help our subconscious build a 360° picture of our surroundings.  In the final illustration, Saotome Sensei places nage again at the center of the attackers, but includes all of the angles and attack vectors of all ukes, in all directions.  The illustration includes lines even behind the attackers, and portrays a very large space.

If the resulting illustration resembles a compass rose or a buddhist mandala to you, it’s no coincidence; Sensei used both of those analogies while explaining “ma no hakare” – the wisdom of space and location. Ma No Hakare, he explained, signifies “spatial strategy” (“ma”= “distance”, as in the term “ma-ai“), and includes understanding and awareness of the terrain, environment and situation; an appreciation of whether the space allows big throws or small, whether the terrain has obstacles or is uneven, if the sun is glaring in one direction and not in another.  This spacial awareness includes a sense of attentiveness, but also a calm, almost meditative mindset that “opens” one’s perception and attention to the entire environment throughout the entire randori and not just individual attackers. 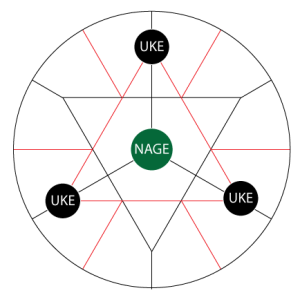 Saotome Sensei talks about many of these principles in his book, “Aikido and the Harmony of Nature”, without explicitly explaining their application to multiple attackers. While there are many other lessons and tactics that can be applied to randori, Sensei explains that these three are “the essence!”

If you choose to quote or republish this article, please cite us as the source and provide a link to the original: https://tampaaikido.com/articles/saotome-sensei-and-the-science-of-multiple-attackers/

This article has been translated and posted in Spanish: Aikido En Línea (7/27/2015)