Recently – and most notably at this year’s Cherry Blossom seminar at the Shobukan Dojo in D.C., Saotome Sensei has been using the term “kikubari.”  Over a private visit with Sensei, I and a few others (Don Ellingsworth, and Gary and Ania Small) had the opportunity to visit with Sensei about the term, and why he feels it is important for martial artists to understand and cultivate. 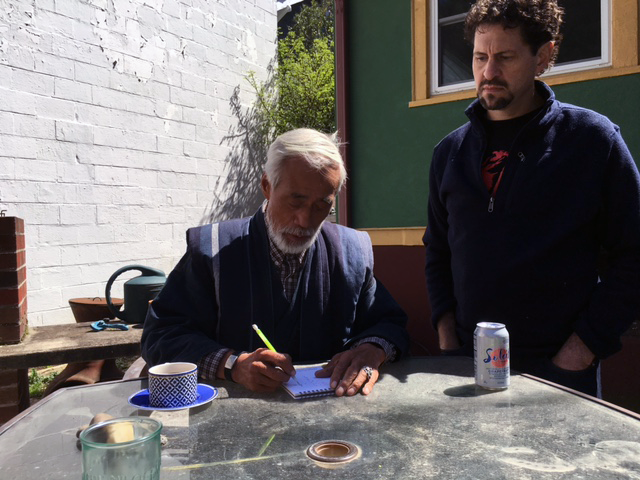 Kikubari is used in contemporary Japanese language to mean attentiveness and even consideration of those around you; according to Sensei, it literally means “distributing ki” (he makes a motion like dealing cards around a table).

In the context of martial arts, however, it takes on a meaning of awareness and connecting to the external environment in a way that is important to life and death.  The term is closely related to zanshin (connectedness / awareness) and ba-no-hakari (awareness of the environment and terrain), except with a special focus on intensity and focus of spirit.  It is, in fact, the essence of mindfulness, except instead of investing consciousness in one’s own body, it is an external mindfulness that connects and expands awareness to all of one’s surroundings.

Sensei explains there are different levels of martial focus. 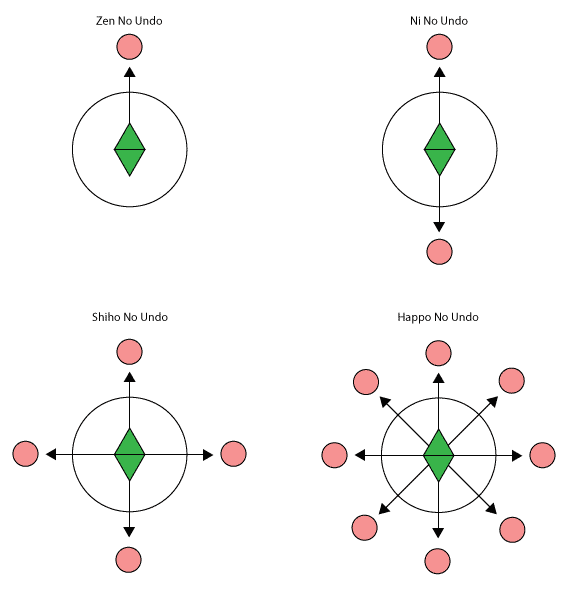 Sensei believes that not only do strategy and tactics change with each level, but also the state of mental balance and focus that one must manifest.

Technique and physical response also manifests differently at each of these levels, in a way that is critical to understanding the underlying meaning and nature of that technique; Saotome Sensei explained that the manifestation of movement in happo-no-undo is the essence of irimi tenkan (enter and pivot), and vice versa. 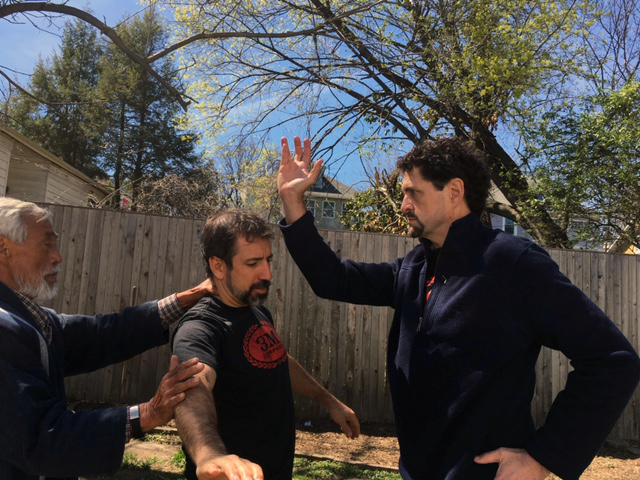 Sensei demonstrates the transition to ni-no-undo by escaping from between two attackers.

More than simply being “aware” of one’s 360 degree surroundings, kikubari signifies a strong spiritual connection in all directions.

While the term kikubari might seem to be only recently emphasized by Sensei, as a principle it has always been at the forefront of his training and teaching.  Sensei explained how when he built the Zen garden at the back of the Shobukan dojo more than 30 years ago, he intentionally built it as an environment for meditating upon and cultivating kikubari.

The garden itself is rectangular, and mostly built of stone (including some truly enormous pieces of granite originally donated by Charles Lance, a rockscaper in West Virginia) hand-picked by Saotome Sensei and Patty Saotome Sensei for their individuality and what they would represent in the garden.  “Each stone has a personality,” Sensei described, and “together they represent all of Nature.”  The rocks represent mountains, trees, terrain, and even a curving path of black rocks represents a winding river.  As prosaic as this symbolism is, however, there is a deeper structure and purpose to the Shobukan Zen garden.  At the very center is a flat rock, selected and placed for seated meditation. By being in the center, the meditator is tasked with the goal of connecting her spirit in harmony in all directions around herself simultaneously; making herself part of the Nature the garden provides and represents; and investing an intense awareness and appreciation of all parts of the garden at once.  The visitor to the garden is subtly encouraged to envision the entire garden around themselves, to feel its living energy with all their senses, even (especially) the parts of the garden they are not facing. 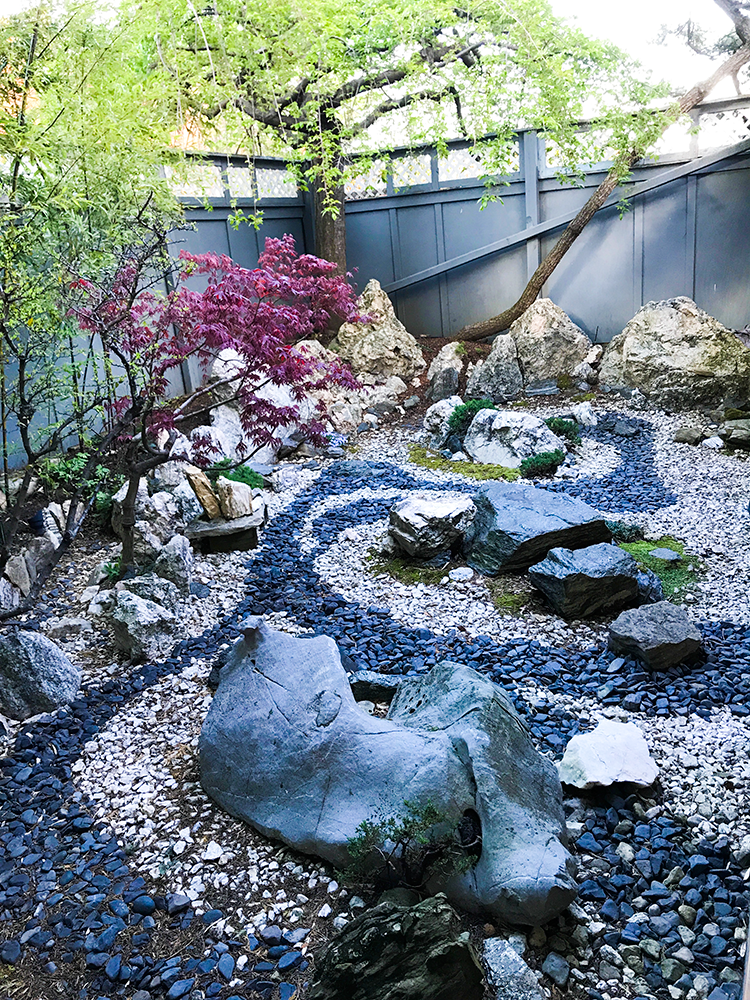 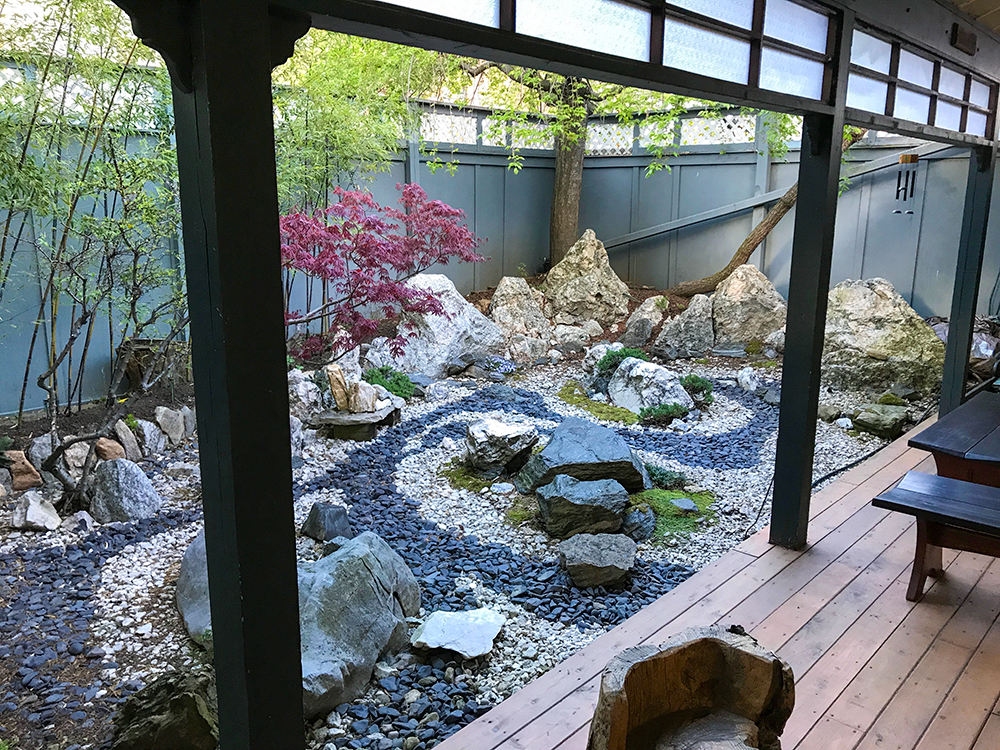 Thus, Sensei describes the garden as a tool for nurturing “randori aiki”, simultaneous awareness, spirit and connection of the self as part of the complete environment, including (but much more than) attackers in all directions.

I was having a conversation this weekend with Steve Schneid (another student of Sensei’s), who observed that Sensei is always relaxed and never gets ready for an attack; there is no transition in his body, attitude, or energy when he is attacked as he is always invested fully in himself and what he is doing.  He does not tense or ready before being attacked; for him, the moment of conflict and moment of meditation are the same.  As a result, when Sensei teaches or performs a technique, it always seems relaxed and effortless.

However, relaxation in context of kikubari is a very dynamic thing.  At the Cherry Blossom Seminar (and many others), Sensei frequently emphasized the word attention! (a-ten-SHUN!).  For Sensei, the English terms “tension”, “intensity”, and “attention” are closely linked, and convey a complete investment of focus and aliveness into the moment.  It is the mindfulness of the battlefield, the electricity of knowing that each moment death may be around the corner, that a slip in alertness might mean the end of your life.  Thus, while Sensei is always physically relaxed, he is also mentally and emotionally completely focused – and this is what he wants his students to manifest in their training.

I am reminded of a quote by Taisen Deshimaru, one of the most influential Sōtō Zen teachers and missionaries of the last century.

Imagine how awake, interested, and utterly invested in the moment you would be if you found yourself on fire. You would not react by tightening your muscles or moving stiffly; you would not apply reasoning and logic to plan your reactions; you would not sleep through the event.  Rōshi Deshimaru is instead urging that students “wake themselves up” with the intensity of being on fire as being the practice of mindfulness; Saotome Sensei is urging his students to cultivate kikubari as the intensity of imagining one’s surroundings were on fire as the practice of external mindfulness.

Through this practice of intense externally invested consciousness and spirit the martial artist not only discovers mastery of movement among multiple attackers, but also a path to internal harmony as they connect to their correct place in Nature and the universe.

I had a discussion with Oguzhan Ylmaz, who asked me to clarify the relationship and differences between “zanshin”, “ba no hakare”, and “kikubari”. I of course am working within my own understanding of these terms, so my answer reflects my own training and meditation background.  These terms are closely connected, so it is understandable that many students have difficulty making a distinction between them. It doesn’t help that terms like “zanshin” are used in many different ways by different teachers and organizations.

To begin with, I feel that “ba no hakari” is very tactical. It signifies being aware of the hazards of the terrain, having the sun at your back, being higher on the steps or the hill to have the advantage of height. It is an awareness of the advantages of one’s environment, or surroundings, as they may affect you in combat or be used to your advantage or disadvantage.

“Zanshin” and “kikubari” are much closer related. I think of them as on opposite ends of a spectrum – automatic awareness versus mindfulness (conscious investment). Think about it this way. When you first started wearing a hakama, you tripped a lot – especially when you rolled! It seemed very awkward, and you probably wondered why anyone would wear a hakama for the aggravation it can cause. To not trip, you started paying close, careful attention to your feet when you moved – you exercised kikubari. Over time, however, you gained an automatic muscle memory and awareness about your hakama that did not require your conscious attention; now, even if your foot gets a little tangled up in your hakama while you roll, your foot automatically senses the tangle and adjusts without you having to trip, or stop and disentangle yourself. It became zanshin.

“Zanshin”, to me, is also what you gain when you train on a full mat. When you were a beginner, you were always bumping and rolling into your neighbors. As you got more advanced, somehow you just automatically learned to steer clear of other students without thinking or really noticing much of their movements consciously. Of course, sometimes collisions still happen – but pay attention to how amazing an entire dojo full of people rolling around can avoid each other without looking around or paying much attention. Or go to a grocery store and notice how most people are absolutely oblivious to the people around them by comparison. This is automatic knowledge, and it’s very important, because if we had to pay attention to everything, all the time, we would be overloaded. Our brain is very powerful at filtering input and tracking our surroundings; zanshin is just the art of training our brain as to what is important for our safety in martial situations.

“Kikubari” (“allocation of ki”) is explicit attention paid to one’s surroundings, but more importantly, to one’s attackers. It is learning how to avoid “tunnel vision”, and how to grow your Aikido to encompass the energy and attack and flow of not just the attacker in front of you, but all the (potential) attackers all around you. It is also connecting yourself spiritually to the horizons in all directions, and the peak of heaven, and the root of the earth so your movements and mind are larger than your opponents’ and you remain connected to aiki, harmony, perspective. It is the martial, military expression of zazen meditation / zen mindfulness practice. In zen mindfulness, you are calming, emptying, awakening, activating yourself internally, investing your spirit into your body. In kikubari, you are investing this same attention and awakening externally, cultivating a mindfulness of our environment, your attackers, heaven and earth.

This article is based on discussions with Saotome Sensei during the April, 2017 Cherry Blossom seminar at the Aikido Shobukan Dojo in Washington, D.C.  Special thanks to Gary Small and Don Ellingsworth for photos, and Stephen Earle for help with translations.

If you choose to quote or republish this article, please give a citation and link to the original article: https://tampaaikido.com/articles/ki-kubari-external-mindfulness-and-martial-awareness/