O Sensei told us we must seek to make our techniques all divine techniques, but we overlook the mystery and mastery in techniques that happen to every one of us every time we train.

In Zen Buddhism, the principle of mushin can be interpreted as “everyday mind”, implying that a sublimely, deeply unified state of spirituality is not only accessible by anyone, it is indeed a natural state of being.  This is perhaps in contrast with some western religions (and even other eastern religions) which hold that the highest states of spiritual enlightenment are only gifted upon a very rare and unique few whom we call saints and immortals, gurus and lamas, cardinals and popes. I think the distinction is very important to one’s individual path, and just as importantly to one’s pursuit of their Aikido way.
If your unchallenged assumption is that the deepest and most profound manifestations of spiritual wisdom and grace are reserved for lofty and preordained elites, it means you are resigning yourself to a considerably more shallow and limited spiritual journey in this life.  You will not strive to journey far, because you know you will never attain any great heights.  In his Age of Reason, Thomas Paine wrote that if God’s truth is only revealed to a select few, then others not receiving such personal revelations should be skeptical; whether or not somebody else’s personal revelations are valid, they are indeed personal and others should be critical of assumptions about what they mean for their own experiences.
However, like many I believe we are afforded glimpses of the Sublime Mystery with our every waking breath, and whether we cultivate such glimpses and cherish them for what they are or dismiss them because we are inattentive or doubt our capacity or worthiness to receive them is up to us.  Each neglected glimpse will be an opportunity lost and the distance we can travel in our lifetimes are shortened, but it is never to late to open our eyes in wonder.

“For the Torah [Law and truth of God] resembles a beautiful and stately damsel, who is hidden in a secluded chamber of her palace and who has a secret lover… At first , when she wishes to reveal herself to a man, she gives him a momentary sign.  If he understands, well and good; if not, she sends to him and calls him a simpleton… When he does come to her, she begins from behind a curtain to speak words in keeping with his understanding, until very slowly insight comes to him… She says to him: do you see now how many mysteries were contained in that sign I gave you on the first day, and what its true meaning is?  …And then for the first time he understands the true meaning of the words of the Torah.” – passage from the Zohar [“Radiance”], a famous work on Jewish spiritual mysticism published in the 13th century and attributed to a 2nd century Rabbi.

So far everything I have said could fall into the realm of banal religious platitudes, but I think the spiritual metaphor can carry through into concrete results, measurable performance, and shared experience in a martial practice environment.
Just as it is tempting to assume that of course the Pope or the Dalai Llama experience spiritual holiness that we wretched commoners can never experience, I find that martial arts students of all levels (even those who have trained for decades) assume that of course shihans (or hanshi, or soke) experience and feel technique on a level that we can never ourselves feel.  Who could find fault with such an assertion?
However, when I watch students practice, I frequently see even raw beginners accidentally get everything right and throw their partners effortlessly and beautifully.  Because they did not feel the muscular strain of overwhelming their opponent’s strength, these moments are inevitably shrugged off and dismissed as meaningless and valueless — even if their partner is laughing with surprise and stunned delight.  Why?  Because the students didn’t plan and force the outcomes intentionally, because the execution didn’t feel like the struggle they were expecting, because of course they don’t know enough to have done and felt something amazing.
I have come to call these surprise moments of training disbelief “shihan moments”.  I believe we all experience them, and in fact that if I could capture on video all the times I have witnessed my (and others’) students create and dismiss such moments, I could edit them all together into a video which everyone who watched would wonder in amazement at the skill of these talented masters. 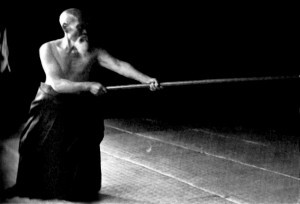 In Saotome Sensei’s book, “Light in Transmission”, he relates a quote from O Sensei about the importance of investing the spirit of heaven into our training to create “divine techniques.”

“So even right now this man, Ueshiba, is breathing in and absorbing the entire universe into the bokken [wooden sword] that I hold in my hands.  I am gathering ki and performing kamiwaza [divinely inspired techniques] as an act of misogi [purification], cleaning away evil in the world.  Unless one brings the light of wisdom into objective form in his technique, then that which one is practicing is not a true expression of the martial sprit.  Unless one transfers one’s spirit and soul into the sword, transforming it into a sword of the gods – that is, a receptacle for the ultimate emptiness of the universe – then the martial way cannot fulfill its mission of realizing peace in this world.  This is the meaning of standing on the floating bridge of heaven, to be of the mind that one is standing at the exact center of the infinity of empty space that makes up the universe.  It has nothing to do with determining winners and losers through competition or the matching of one’s technical prowess against another’s.  Current reality, the dream-world reality, and the reality of godhead – these are the three worlds of aiki to which you must awaken.” – O Sensei Morihei Ueshiba, in Light on Transmission by Mitsugi Saotome

We can read this, scratch our heads and dismiss it as something only Saint Ueshiba could understand and manifest.  Or, we could look for moments in our regular training in which our performance briefly exceeded our skill levels, and learn to let go of our expectations and plans and egos and instead cultivate those moments, invite them, create the situations in which they might choose to happen.  With this mindset, the difference between a beginner and a shihan is one of attentiveness, one of expectation, one of belief (faith) that the moments can and will appear, and is a matter not of quality but of frequency.
In my personal practice, I do not find these moments happen while teaching very often; teaching for me is usually intentional and analytical.  Sometimes I respond to questions with answers that seem inspired, for which I don’t know the origin; maybe those moments count.  Maybe the phenomenon of Sensei Radio counts (the recurring incidents in which different Sensei seem to be reading from the same syllabus although disconnected by time, distance, or lack of communication).  I marvel most, however,when I find those moments in my keiko (training), whether I am uke or nage.
For example, my favorite environment for cultivating my own shihan moments is randori (multiple attacker training).   Sometimes (and I know I am not the only student this has happened to) something “crazy cool” happens while I am in the fray; something like simultaneously throwing two people, or pinning three people, or just something like making a tiny, tiny movement that somehow results in all of my attackers spectacularly missing, crashing together, or attacking one another.  Of course, my first reaction is to immediately try to recreate what I did so I can savor it, make it my technique, and to bask in my newfound amazing skills.  And of course, I won’t be able to recreate that exact outcome again if I tried for a hundred years!  Clearly, the outcome wasn’t my technique, it wasn’t as a result of my intention, it wasn’t my skill to draw upon and force into being whenever I desire.  Clearly, what happened was beyond my actual skill level or pay grade, and a little humility is called for, and indeed is readily served up when I try to force things.   Yet! By not being invested in the outcome, by training hard and opening up to the moment, I can with increasing frequency coax these moments into appearing. While not mine to command, I find they are sometimes mine to access.
To me, because they feel like I briefly am a conduit to something greater than my own ability, it feels like these moments must be the “divine techniques” that O Sensei spoke of.  They are the effortless “zen” of movement and martial technique that appear on their own yet disappear when you grasp for them, just like an elusive memory that evades recall for as long as you struggle to remember but pops into your mind as soon as you let go.  They are wonderful, delightful and unexpected gifts, so much more satiating and wondrous than learning how to incrementally throw a little more powerfully, to perform technique a little more expertly.  Because I see them happen to almost everybody, at every level down to raw beginners, it probably means that “divine technique” is something that is accessible to everybody, if they just admit the possibility and cherish when it does happen to them.  It probably means that such manifested moments aren’t mystical or holy in any formal religious sense, but are part of our birthright as human beings that we can just learn to rediscover. It probably means I could have trodden so much further down the path of my lifetime, if only I was attentive enough to appreciate them sooner!

“I tell you the truth, when I say that the heavenly realm is within you. Only when you have established the divine realm within, and overcome the demons of doubt and fear, will you discern the key.”  Jesus of Nazareth, from the Gospel of Thomas

Of course, in the meantime, listen to your sensei!